Salmon farming started in Norway and in Scotland in the seventies. Initially intended to produce juveniles for repopulating purposes, it evolved into full farming, by keeping young salmons in cages close to the coasts, so as to ensure the supply of fresh salmons to the markets.
Soon after, France followed the Norwegian example, starting with rainbow trout and coho salmon farming. The latter never picked up and its production was ceased, due to the fragility of the species during the first summer at sea and the need to produce juveniles for its development. Atlantic salmon farming started once it was possible to lay out farming structures and to farm the most suitable populations obtained through selection programs. Sea farming of the salmonidae became possible once their characteristics were well understood and they could be controlled (migration from rivers to the sea and associated smoltification, translating into anatomical, physiological and endocrine modifications).

The Atlantic salmon lends itself to the production of large fish for fresh consumption (up to more than 4 kilos). It is also used for repopulating and fishing. It takes roughly 20 months from hatching to a commercial size of about 2 kilos.

Being a migrant fish, the salmon has to adapt itself to changes of environment. It breeds in fresh water and the eggs are taken at fall on adults that came back to the rivers to spawn (1,000 to 2,000 ovules per kilo of female). Following artificial fertilization and incubation at varying temperatures, the eggs hatch between the end of winter and the beginning of spring. The vesicled then “parr” alevins are first fed an initial feed. Near the end of spring, they are sorted by sizes and transferred to rearing ponds with controlled conditions. They are sorted again at fall for sea farming (“smolts” from 30 to 50 g). Control of the photoperiod makes it possible to shorten the period in fresh water down to 6 months. The following spring, they are transferred in sea floating cages in which they will spend between 8 and 18 months (700 to 900 g, 8 to 9 months after the transfer).

Higher salmon performance is sought through the selection of populations from one generation to the next ; the selected genitors will pass on characteristics that are of interest for the farmer: growth rate and late maturation. It should be noted that maturation is also controlled by producing sterile triploid individuals or by continuous lighting techniques developed in Norway. Moreover, farming can withstand a high density ; it tends to drop (from 30 kg/m3 to about 15 kg/m3), in order to minimize pathological hazards and to preserve the quality of fish within the framework of growing organic aquaculture. As to the salmon diet, it calls for more lipids than those of other marine species (about 25%).

Norway, Chile, the United Kingdom and Canada contributed 93,7 % to the world production of farmed salmons. For the last ten years, the production has grown at a rate of 16 % per year. Chile and Japan also produces Coho salmon (Oncorhynchus kisutch). 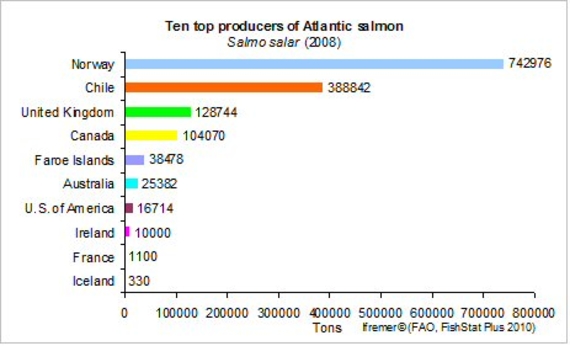 In France, Atlantic salmon production was 1 100 tons at sea in 2008 in marine environment, in Normandy and Brittany. The society of the first locality provides its own fingerlings since their hatchery located at proximity.

Farmed Atlantic salmon is sold in various forms as pre-packaged, frozen, smoked, whole or in slices or filets. A small quantity is also canned, transformed or prepared as ready-to-eat dishes. The flesh, sharp orange or rosy orange, is moderately firm and oily.
97 % of the salmon consumed in France come from farming. Imports of salmon range about 170 915 tons per year (average from 2007 to 2009).