History: from the pioneers to present…

Pearl oysters occur throughout the Indo-Pacific region. They were first fished for almost two centuries for the mother-of-pearl industry, and fine pearls were very occasionally found.

To overcome the decimation of wild populations, spat collection tests were undertaken at the beginning of the 20th century, but the technique was only developed in the late 1950s. There was a renewal of interest in pearls in the 1960s and the first grafts were carried out by the French Fisheries Service, and the first grafted pearls were harvested in 1965. In the 1970s, through private initiatives, this oyster began being cultured for pearl production and a market was developed for Polynesian black pearls. The first substantial pearl harvest took place in 1978 (30 000 pearls) and this activity began developing after 1985

Hatchery rearing of spat is not yet fully controlled. 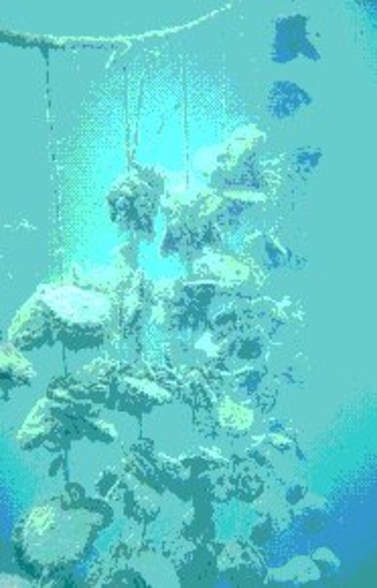 Spat for culturing is collected in the natural environment by setting on artificial substrates. After 12-24 months without any intervention, the oysters grow to 5-10 cm and are then set on oyster-rearing chains suspended from subsurface longlines at 6 to 10 m depth. 4 000 to 10 000 oysters are set on each of these 200 m oyster-rearing chains, which are spaced 10 m apart. 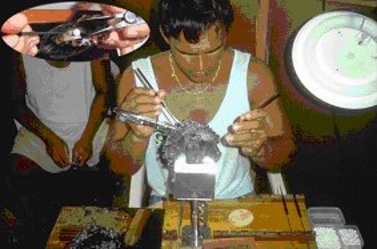 After 3-12 months, the oysters reach a size of around 10 cm and weigh about 120 g, and at this stage they are ready to be grafted.

After grafting, the oysters are again set on longlines until the pearl grows, i.e. around 18 months. The regulations stipulate a maximum density of 2 400 oysters per 200 m oyster-rearing chain.

Pearl quality is controlled by the French Territorial Services (minimum thickness of 0.8 mm of mother-of-pearl around the nucleus, roundness and defects). The pearl producing and trading professions are also becoming standardized.